Some facts by Jeffrey Green 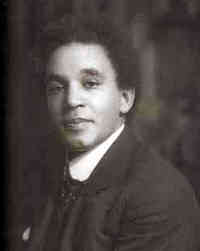 The London-born composer Samuel Coleridge-Taylor has been the subject of biographies, articles, web sites, CD booklet notes, a novel, and entries in encyclopaedias. Yet he remains elusive as a person, misunderstood as a musician, and a victim of the innocent prejudices of commentators. This article uses some often overlooked documents to reveal something of the truth.

His birth registration states he was born in 15 Theobalds Road, Holborn, London on 15 August 1875. Details of that house and his English family can be recovered from the census. That of 1861 shows 15 Theobalds Road was the home of Benjamin and Sarah Holmans with four children: John, Daniel (born around 1854), their sister Sarah (born around 1848) and the oldest child, Benjamin Jr., born around 1840. The children had been born in Dover, Kent, and their parents in or near that port town. The census of 1871 for 15 Theobalds Road has Benjamin Holmans and his wife Sarah, their son John (age 16) and ‘daughter’ Alice (aged 14). Alice Holmans was to be the mother of the composer. There were two other families living in the property. By 1877 road-widening had led to the demolition of the row of houses and Holmans, Alice and young Samuel moved to Croydon . They were noted at 67 Waddon New Road, Croydon, in the 1881 census.

It was in Dover, in September 1856 that Alice had been born – her mother’s declaration to the registrar of births named no father. It is almost certain that the father was Benjamin Holmans Sr. His affair with Alice’s mother Emily Ann Martin was not fleeting. She was to move from Kent to Croydon, and visited her bastard daughter into the 1900s. She provided money; Benjamin Holmans provided the home, into the 1890s. This support was crucial in the composer’s childhood.

The musical childhood of Coleridge-Taylor takes on a new perspective when we see that the London census of 1861 shows that Benjamin Jr was a ‘professor of music’. Two decades later he was listed as a ‘musician’ at Cheriton (now Sandgate) near Folkestone, Kent. In 1891 the Cheriton census shows two of his children were musicians. Here we have clear evidence that the uncle and two cousins of Coleridge-Taylor earned their living as musicians. That young Coleridge (as he was always called in the family) had violin lessons from the man he called grandfather has been known, but not the extent of this musical family.

Another influence of the composer’s childhood was his African father. And here there has been confusion, stimulated by the first (1915) biography stating that his father was a London-qualified doctor from Sierra Leone whose medical practice in Croydon failed due to racism, forcing Dr Taylor back to Africa and leaving wife and son in Croydon. This is a lie.

Daniel Peter Hughes Taylor had progressed from Freetown to a private school in Taunton, Somerset in 1869. He then studied medicine at King’s College, London where he qualified M.R.C.P. in November 1874. He left England in early 1875. From Freetown on 18 February 1875 he sent an application to be employed in the medical service of the colony. The application is indexed in file CO 368/9 at the National Archives in Kew, which notes that it was received in London on 12 March. As his son was born on 15 August, it is probable that Dr Taylor did not know his English girlfriend was pregnant.

Dr Taylor was dismissed from the colonial medical service in 1876 but as his replacement was an African (who had also attended that school in Taunton, and King’s College – and had married an Englishwoman) a charge of racism seems unjustifiable. Taylor, whose two brothers were wealthy merchants, scratched a living, moved to Banjul (then called Bathurst) in the Gambia where he had occasional work as a government coroner, had a daughter and died in 1904, from dysentery. His gravestone was erected by the daughter.

Dr Taylor escorted a group of invalid soldiers of the West India Regiment to Jamaica, and may have sailed from Kingston to London but we know of no other opportunity for him to have returned to England. It seems safe to conclude that Dr Taylor was totally absent from his son’s childhood.

Other aspects of the composer’s life get into focus when documents are studied. The woman who became his wife, Jessie Walmisley of Croydon, is generally regarded to have shared his life at the Royal College of Music, London. Her file there shows she left in 1893 (before his seventeenth birthday) and we prefer to think that it was music-making in Croydon that brought them together in the later 1890s.

The Royal College of Music mounted the first performance of Hiawatha’s Wedding Feast by Coleridge-Taylor in November 1898. Regarded as both a triumph for the composer and for the College, a document in the library of the University of Leeds confirms that the plan had been for Nicholas Kilburn and his musical friends in Sunderland to premiere that work later in November. That programme states it was the premiere. Coleridge-Taylor’s professor of composition, Charles Villiers Stanford, had snatched it from Kilburn. That explains why the premiere was so poorly performed. And also reveals that its composer had a reputation as a composer of great interest in the summer of 1898.

A study of the adverts in the London musical press confirms that well before that first public performance of Hiawatha the music of Coleridge-Taylor was attracting critical praise and public demand. Pieces he had written to be played by violin and piano were re-written for solo piano, and for larger groups (generally violin, viola, piano, and cello) and then both small (20-25 instruments) and full orchestra (45-60 instruments). Four Characteristic Waltzes is one example: and the piano version was still in print in the 1960s.

At this time, 1897-1899 there was no doubt that Samuel Coleridge-Taylor was widely seen as a new musical star in Britain. Two additions to the Hiawatha choral cantata and its full performance by the Royal Choral Society in the Albert Hall, London, in March 1900 confirmed his status. Within months Edward Elgar overtook him, despite his rural origins (Worcester), lack of formal music education (his father ran a music shop), and three previous failures to interest London critics and entrepreneurs in his music. That Elgar recommended Coleridge-Taylor to the committee of the Gloucester musical festival in 1898 (a group Elgar doubted could read music) reflects Elgar’s local achievement in the nearby Worcester festival, and should not be seen as the gracious support of the ‘coming young man’ by a national figure. Elgar’s fame was to come; and it was to dwarf Coleridge-Taylor’s in the 1900s and 1910s, but that was just not true in 1898-1899.

Coleridge-Taylor was not poor – his estate was valued at over £1000 when he died in September 1912, and a suburban London house cost less than £300 then. £100 was an annual income for most working men. Nor was he unable to afford holidays, for the 1915 biography mentions several seaside holidays and his half-sister told me that their mother had taken Coleridge to the seaside as a child.

It is true that composers were seldom paid royalties. Indeed, the absence of a performing rights system was universal. The cost of setting a page of music made the purchasing of new (and untried) works a dangerous investment by the publishers, and the much criticized contract he signed with Novello and Co over Hiawatha did not allow for royalties – in other words, he did not get a percentage of the income when the work sold by the thousand. That was true of all composers at his time, with Elgar selling outright a piece that would have made Elgar fabulously wealthy had he secured a royalty contract. The music publishers had warehouses with shelves groaning with unsold music, a statement that is supported by a study of the music press which announced work after work by men and women who failed to achieve any lasting (and sometimes no) success.

The publishers owned the weekly and monthly music magazines (Novello owned the Musical Times) and were naturally biased towards their own composers. Coleridge-Taylor was published by several London composers, who felt that his songs, his works for solo piano, and for violin and piano, would sell to the music-making British public. They also had different sections of the market (Novello was the leader in choral music).

It is difficult for us to remember that during Coleridge-Taylor’s lifetime access to music was usually through amateur performances. Local groups would mount two or three concerts a year, there were festivals, and concerts in major cities. But recordings were few, radio was in its infancy, and the parlour piano, amateur singers and fiddle-players were numerous. And that was the musical background of Coleridge-Taylor, with his grandfather and his violin, his uncle and cousins near Folkestone, and the hundreds of thousands of men and women who purchased, played, sang, and enjoyed the tuneful music of Coleridge-Taylor.

LEAVE A RESPONSE IN THE ‘LEAVE A REPLY’ BOX AT THE END OF THIS PAGE.