Exhibiting captives as trophies was both widespread and ancient, but as European awareness of Africa developed in the 19th century entrepreneurs took advantage of railways and presented Africans around Europe, on stage, and in exhibition centres. Zulus were exhibited in England from 1850, for example. The men, women and children who were presented are part of European popular culture and were seen by hundreds daily. Linking groups of Africans to recent conquests and battles in Africa seemed to attract crowds, and the legendary women soldiers of Dahomey (modern Benin) provided an additional attraction. Dahomey Warriors or Amazon Warriors were exhibited in France soon after their lands were taken by the French in 1890. In 1893 over fifty Africans were exhibited at London’s premier entertainment centre, the Crystal Palace on Sydenham Hill. 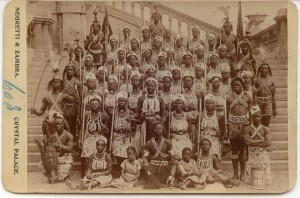 The group first appeared in May 1893. The Daily Telegraph said ‘Nothing so original has been seen in England for many a long day’ and the Daily Chronicle noted ‘A strong attraction, both for its novelty and the alacrity with which it displays the drill of a savage army’ whilst the London Standard said it was ‘the sight of the season’ and the Africans were the ‘finest of the races of Africa’. They made four appearances daily and numbered 58 people. On 17 June 1893 the showbusiness weekly the Era noted that they ‘go through their war dance and perform athletic feats with marvellous agility’. A group of East Anglian brewery workers on an annual outing visited and the Africans were noted by the Essex County Standard of Colchester (16 September). The brewery staff would have spread the news in Colchester, Eye, Ipswich, Cambridge and Halesworth.

By October the Warriors were indoors, at London’s Oxford Music Hall. The Era of 7 October noted the senior woman was named Gumma. The Standard advertisement of 17 October said they were ‘grand specimens of Muscular Womanhood’. It was the semi-naked women who attracted crowds to the extent that a shop keeper took the matter to court, for they were accommodated at the Canterbury Music Hall and left every day for the Oxford Music Hall ‘which had the effect of collecting together large crowds nightly’ (Pall Mall Gazette 19 October). Extra police were on duty, the Africans had adopted all the suggestions from the police, and were ‘well wrapped up’. The judge said that if people were ‘foolish enough and curious enough to collect in order to see them, notwithstanding their want of sufficient overcoats – (laughter) – the Court, he thought, should not be asked to prevent them so collecting’. The plaintiff claimed his wholesale clock and watch business was suffering. Many newspapers reported this court case (Standard 19 October; Morning Post 21 October and Lloyd’s Weekly Newspaper 22 October).

On 18 December they started their show at the Waverley Market, Edinburgh’s Christmas and New Year Carnival (Glasgow Herald 19 and 26 December 1893) and from 8 January 1894 they were at the Olympia in Newcastle. The Newcastle Weekly Courant of 30 December 1893 noted the ‘inhabitants’ numbered fifty, and that, as at the Crystal Palace, Lockhart’s elephants were on show too.

Thousands had seen them but we have no idea what impressions were made or if there were any long-lasting memories. Ethnic exhibitions or human zoos were common for decades but identifying the individuals and learning what they thought of the white public remains guesswork. It is known that a small group of Africans from Sierra Leone worked as ‘Dahomey Warriors’ in Brighton in 1908, and that Joseph Lee, an African American from Maryland, worked for years as Bata Kindai Amgoza Ibn Lobagola and published books in the 1920s. Images were everything it seems.

The logistics of travel, accommodation, food and daily care remain to be investigated, although it is known that groups such as the West India Regiment’s band which played at the British Empire Exhibition in Wembley in 1924 were accommodated in army barracks. Human rights groups often protested, and governments put pressure on colonial authorities, but it was not until the television age that such exhibitions fell from favour.

LEAVE ANY RESPONSE IN THE BOX AT THE FOOT OF THE PAGE.