Oldham Local Studies and Archives own the only surviving copy of The Life of the Late James Johnson (Coloured Evangelist). An Escaped Slave from the Southern States of America. 40 Years resident in Oldham, England. Its copyright was by Miss Alice Johnson of 5  Greenacres Road, Oldham. It has a dozen pages and was published in 1914. Like most slavery narratives, the majority of its pages (ten) detail Johnson’s life and struggles in the U.S.A. The text does give basic information, and as Johnson says he was born on 20 March 1847 it is clear that the “James A. Johnson” whose death was registered in Oldham in early 1914, aged 66, is him.

The text, which appears to be a fragment of autobiography, begins “I was born at Smithfield, about 46 miles from Wilmington, in the State of North Carolina … as to who my father and mother were I do not know; I have no recollection of them”. Smithfield, NC (110 miles from Wilmington) is not where he was born – it was Smithville. This small town was renamed Southport in 1889 and is on the Atlantic coast near Smith Island and Cape Fear, NC. Johnson says he was in that region and so his account of escaping during the Civil War with three others in a rowing boat to the Union blockade ship Stars and Stripes matches the presence of that vessel off Cape Fear in 1862. Johnson reached New York, and worked his passage to Liverpool on the Blenheim, taking 28 days and reaching England in December 1862. He spent over fifty years in England. 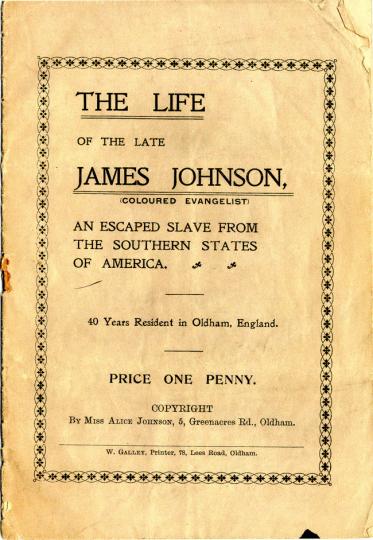 We can assume that his initial efforts in begging and street entertainments did indeed take him to Sunderland, Worcester, Oxford, Leicester and Birmingham etc and that he joined a boxing troupe run by Chuckey Harris and met the celebrated bare-knuckle boxer William “Bendigo” Thompson (1811-1880). He went to Oldham in September 1866 and started work in one of the foundries in that Lancashire town. Like Bendigo Thompson, Johnson became a preacher. His daily bread was earned by labouring in foundries, and in various British documents into 1911 he is described as a “striker”, “striker for blacksmith”, “blacksmith’s striker” (twice) and “iron striker”.

“I was married in 1869 to Sarah Preston, through whose instrumentality and patience I have acquired the blessed boons of being able to read and write”. The registration of the marriage of Sarah Ellen Preston to James Johnson was in Oldham, and the 1871 census records their presence in the town. She was 29, a cotton reeler born in Oldham; and he was 24, born in “North Carolina, America”. The registration of her death in early summer 1886, aged 44, was also in Oldham.

Not located in the 1881 census, Johnson has two appearances in English documents dated 1891. The census records him at 39 St Mary Street, Oldham – with the middle initial “A” – a widower born in “America” aged 45. At that address was Mary A. Cook, a widow who boarded there. Oldham-born, she was 34 and a domestic servant. Present was her daughter, also Mary A. Cook, born in Oldham, aged nine. Months later, on 13 December 1891, “James Alfred Johnson”, a 44 year old striker of Rock Street, Oldham, married Mary Ann Cook at the parish church of St Stephen, Oldham. She was 38, a widow, and also lived in Rock Street. Illiterate she signed the register with a cross.

Apart from the addition of a middle name, Johnson seems to have been consistent in his definitions. So – given the statement in The Life of the Late James Johnson – that the registration declares his father to have been an “American Slave” named Tom Johnson (deceased) is curious. There are several unresolved complexities over the females linked in these documents with James Johnson, however.

Widow Mary Ann Cook (who had become four years older since the census of 1891) had her deceased father declared as John Heywood, a labourer. No Heywood-Cook marriage has been located. The documentary evidence from ten years later shows the Johnsons were living at 4 St James Street in Oldham when the 1901 census was conducted. “Jas Alfd Johnson” was 54, a worker, born in “South America Carolina” to which an official added “Brazil”. His wife Mary Ann Johnson was aged 50 (sic) born in Oldham. And there was an Oldham-born unmarried daughter, Alice, aged 28,  a dressmaker who worked at home.

At first glance Alice would appear to be the author of the 1914 Life and it seems Mary Ann and James Johnson did have a daughter named Alice, in Oldham, but in late 1892. It could be a slip of the enumerator’s pen that made her 28 in 1901 when she was eight.

Signing the census forms for 1911 as “James A. Johnson”, at 5 Greenacres (the address on the Life) he declared himself to be 60, a blacksmith striker at an ironworks, born in “South America” and resident in Oldham, of American nationality, Johnson filled in two lines. His wife Mary A. Johnson was aged 59 (sic) and had been married for 27 years. She had had one child, who was still living. That child was their daughter Mary A. Johnson aged 26. Single, a shop assistant in a ladies outfitters, she and her mother were Oldham-born.

James Johnson died in Oldham in the winter of 1913-1914, aged 66, and was buried in Royton Cemetery. There is no grave marker.

I am indebted to the staff at Oldham Local Studies and Archives, and to Charles Kay who also was baffled by the Mary Ann and Alice Johnsons.

In late 2020 Susan Smith of the Oldham archives contacted me to advise that Johnson had no children by either wife; that Alice Johnson of the 1914 book was born Mary Alice Cook, and married Edgar Berrett in 1927. She died in 1947 and is buried in the same Royton cemetery plot as Johnson and both of his wives.

Many thanks to Susan Smith.

LEAVE ANY RESPONSE IN THE BOX AT THE FOOT OF THE PAGE.